*Thanks to Media Impact Project for permitting us to repost this piece.

“[Documentaries] have singled out some of the most vital issues facing Americans today. To these issues they have attempted to bring information, clarification, and more importantly, a point of view…There has been a growing appreciation for the need for different standards against which to evaluate the performance of the documentaries.“ [emphasis mine]

As a media strategist, I’ve been talking to social change filmmakers about social change funders (and the other way around) for many years now, but very few issues make all eyebrows go up more than “metrics.” In my unscientific and subjective opinion, these expressions of consternation are getting more pronounced as a pendulum swings once again towards the indicators of change. (The topic can also bring looks of excitement, anticipation, curiosity and incredulity, but that’s another essay.)

It’s time for a more – dare I say– measured conversation among filmmakers, funders, social scientists, artists and advocates about what we mean when we talk about impact.

Social scientists – with or without participation from creatives– have been hammering out methods and metrics for assessing the contributions of non-fiction storytelling for a long time. Researcher Elmo Wilson, trained as a journalist and quoted above, wrote about “different standards” for documentaries in 1948. When I commissioned an assessment of The Heart of the Matter Community Campaign, based on the film by Gini Reticker and Amber Hollibaugh) in 1994, there was already a body of work to build on.

So what’s changed? Amid the 24/7 media deluge, stories that speak to the heart are especially prized. Captivating documentaries – in many forms– are being used today to prompt action on every social issue. New technologies have made it easier to produce, distribute, interact with and gather numbers associated with their influence. That’s one reason why neuroscientists, social entrepreneurs and policy wonks are paying attention as never before. Before we consider whether and which new tools to use, we need to think about what it is that we really want to know. And we can’t assume that the magic of a gut-wrenching, funny and/or searing film can ever be fully “counted.” With that in mind, here are a few ways to delve in.

1. What’s the Change You Want to See?

Metrics mean “a system or standard of measurement” and thus, are not for every kind of documentary campaign. (Some of my favorite films are works of pure art and, happily for me, defy any calculation.) If you’re hoping to contribute to a specific social movement or social change process, ask yourself: what change do you hope to see in, say, one or two years? Do you want to tell a story that will help people with different kinds of perspectives come together, as a Rake might gather various leaves? Or, with the precision of a sharp Trowel, will you dig into a trenchant problem, followed by a clear call to action or policy reform?

Perhaps you want to transport viewers with a strong character-rich story and only a subtle hint of an underlying social problem? These Wheelbarrows have their own qualities and the method of measurement would look entirely different from that of a Trowel or a Shovel. Although many films are hybrids, identifying the strength of your story can clarify what to measure – and even whether to measure at all. (More about the Horticulture metaphor.) And keep in mind that unexpected outcomes, surprising consequences, and creative uses of your story are just as important as your best laid plans – they’re the emotional fuel that filmmakers bring to social movements.

Several years ago, a funder who was new to media grantmaking asked me what filmmakers thought about a particular issue. I replied that I would never attempt to speak on their behalf and that they’re a highly diverse community made up of unique motivations, visions and business models. I thought it might be useful to sketch out some general categories (flawed, yes, as you’ll see below); understanding that filmmakers might crossover at certain points in their careers or refer to completely different identities.

Funders aren’t monolithic either and the comment about filmmaker identities holds for funders as well. This might sound obvious, but keep in mind that the people who make decisions about what to fund are individuals with unique ideas, attitudes about media, experiences and often pressures.

“Social-issue filmmakers have deepened foundations’ commitment to funding nonfiction films. We opened up many more funders’ interest in financing documentary films by cultivating foundation personnel to understand how film could be useful when it aligns with the pursuit of the foundations’ mission.“

Before you meet with prospective funder(s), a) find out what kind of change they are working for, and b) why and whether metrics are important to them. For example, Gates Foundation and Ford Foundation have very different definitions and expectations for “impact.” (Some funders are very public about their position–read what the Fledgling Fund published last summer.) Open up a conversation that seeks common ground — garden metaphor intended — and alignment of aspirations.

Funders who are interested in documentaries have plenty of sources for data–but if they’re considering film, they’re also looking for the emotional connections that only vivid storytelling can bring. (Maybe they’ll see something in your story that had never occurred to you.)

Some funders have heard that the “impact” money is perceived of as “easier to get” than production funds, so they’ll want to know how serious and accountable you are. The funders I know would rather have a candid conversation about the “meaning of metrics” than hear an outpouring of impact guarantees that have little substance [relevance?] or an unrealistic set of goals. Don’t tell them what you think they want to hear. Tell them what you are aiming for as an artist and an agent of change.

As noted above, some funders have evaluation protocols in place that are a condition of accepting a grant. Understanding it in full will help you make good decisions about next steps.

But let’s say that you and your funder—and possibly the advocates or grantees who are eager to work with your film—are developing a way to understand how the project is making a difference. Even if you feel comfortable (or excited, or realistic) about being part of this assessment, it doesn’t mean that you’re the best person to gather and analyze the data. To paraphrase what I heard in a focus group in New York, “So, in addition to financing, producing, getting releases and permits, apologizing to my family, finding a subject that’s gone missing, correcting the color and negotiating my distribution deals…now I’m a social scientist too?” This filmmaker would be off making her next film by the time any “change” could be detected. But in Los Angeles, another filmmaker said: “It’s my project and I’m the only one who could possibly determine what counts as success. That’s my next step.”

We’re developing a tool to help filmmakers weigh their involvement in assessment. (Sign up for our newsletter and we’ll send you our “Perspectrum” once our creative advisors have weighed in.)

I’ve seen how powerful documentaries can fuel social change and I want others to understand this power better and be able to harness it for good. We have the tools. And now we need to apply them in ways that enhance our strategies, inspire new allies, engage the creative community, and strengthen the ecosystem striving for meaningful change. Instead of raising our eyebrows, let’s raise these complex, sometimes awkward issues.  Let’s dig in. 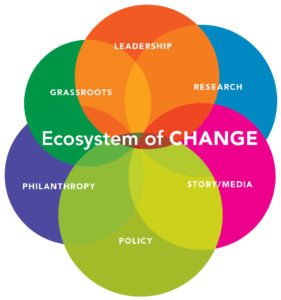 Ellen Schneider directs Active Voice Lab, which builds tools — such as ThePrenups.org and HowDoWeKnow.net  — that help people use stories, art, and culture to advance measurable social change. She consults on strategies for media-savvy pioneers like Atlantic Philanthropies, MacArthur Foundation, Ford Foundation, and Participant Media. Before founding Active Voice she was executive producer of the PBS series, POV.