Money and Power are Overrated: Why True Love for Your Subject Conquers All

Alyce Myatt is the executive director of Grantmakers in Film + Electronic Media (GFEM), a membership organization of funders. She previously worked as a consultant to independent media organizations and the philanthropic community.  Clients included the Center for Digital Democracy, the Council on Foundations, Free Speech TV, the National Alliance for Media Arts and Culture, Emerson College, TVE Brasil, the Heinz Endowments, and the Annie E. Casey and Skillman Foundations.  Prior to her return to consulting, she was vice president of programming for PBS and was a program officer for media at the MacArthur Foundation.  Over the years she has provided program development, production and planning services to a variety of clients in television, radio, and for the Internet.  Her production credits include the Smithsonian Institution, Nickelodeon, and the ABC News magazine, “20/20.” 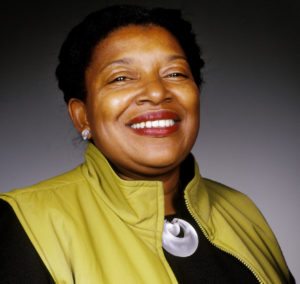 GFEM advises grantmakers on how to use and fund media effectively. How do you tailor recommendations for each grantmaker?

The question is, where is your audience? Do they watch PBS or MTV? Are they on mobile phones, are they online? What’s the behavioral pattern of the audience that you want to reach? I think the technology, after you deconstruct it, tends to be fairly straight ahead, even though you’re looking at multiple platforms. At the end of the day, as always, it’s: What’s the most appropriate platform, and where can I find my target audience?

Can you tell us a bit about GFEM’s Media Policy Working Group?

It’s a group of funders who are supporters of media policy advocacy organizations or are interested in learning more about how media policy affects the impact of their grantmaking. When funding opportunities around the area of media policy arise, in some instances members of the Working Group fund collaboratively. In other instances, it’s just about raising awareness around opportunities, such as the current federal broadband stimulus request for proposals. We don’t broker relationships between funders and practitioners, but we do provide the space for those discussions to occur. Primarily because of capacity, we see ourselves as a conduit through which information flows. We don’t fund, we don’t recommend funding, but if one of our members says, here’s an opportunity and I’d like to let my grantmaker colleagues know about it, or raise awareness about it with their grantees, then we facilitate that through our briefings, teleconferences, etc. We don’t advocate around any particular media policy. We serve as a “town crier,” if you will.

Is your membership increasing?

You know, it is. The organization, while it’s been around for a long time (since 1984), has only been official for three years, and we’ve only had our 501(c)(3) status for one year. I was hired three years ago, and I’m the first paid staff member. So, we’ve been building our organizational infrastructure since then. When I was brought on we didn’t have a membership plan and dues were voluntary. After the first 9 months or so we put in place a paid membership policy, and our membership has grown by better than 20 percent each year. It’s still small in terms of paid membership (50), but it is growing. And our mailing list of funders in now over 1300.

What does your most recent data tell you about new trends in media funding?

Well, one of the things that has happened in the last 20 years is that the philanthropic sector has broadened tremendously. There was a lot of wealth created in this country in the eighties and nineties. And as a result, a number of people are entering into the field of philanthropy: family foundations, individual donors, etc. Whereas filmmakers once relied solely, or to a great degree, on the large institutional funders – like the Fords, the Rockefellers, the MacArthurs – there are now a lot more family foundations that are supporting media. But, the grants are smaller. So an amount that would have been the value of perhaps one MacArthur grant is now comprised of five or six smaller funders. I would say that’s one of the most significant trends that we’re seeing. We’re also seeing funders who are more engaged in their grantmaking. And I think that there are more people entering the field in general, both funders and practitioners.

Talking about multiple funders and engaged funding brings up relationships between filmmakers and funders. Do you have a sense – for the funders and the filmmakers – how it changes the relationship to have so many parties coming together and working on the same project?

Well, I think that it is yet to be seen what the impact of that’s going to be. I think that this trend is still too young. It’s difficult under any circumstances when you have six different grant reports to write in six different forms, even if you try to create a template. But that’s always been the case. And I think that the smaller funders are less demanding in the formality of their reports in some instances.

Do you see funder engagement across the board? Is it more common at a small funding organization or an institutional one?

It’s a different kind of engagement. I think that it’s one thing if it’s a program officer at a foundation, versus someone at a family foundation, where the resources are their own. That’s not a judgment, but it does make for a different kind of engagement. There is a big difference in your ability to engage if you’re managing 10, 20 or 40 grants per year versus 150 to 200 including multi-year grants for both individuals and media organizations.

Do you think that certain films or filmmakers are better paired with smaller foundations versus larger?

No, it depends more on the project size and goals.  And often a large project requires money from every type of source: large foundation, small ones, government funders, individual donors, self-financing and more ─ all mixed in together.

Based on what you observe, then, do you have recommendations for how funders and filmmakers can avoid a mismatch?

Well – and this is my candid opinion – I feel like the Prenups are making the relationship issue more complex than it really is. It’s really about the issue that a funder is interested in and finding a project that addresses that issue. Rarely are funders these days generic. It’s more about knowing your own goals, and being able to state them clearly. If somebody says, “We fund women and girls,” then you don’t go with a project on climate change – unless it’s climate change related to women and girls. It’s fairly straightforward.  That’s one of the reasons we created the Media Database to allow funders to search for projects that meet their program goals. It’s searchable by issue area or topic, geographic region, completion status, and more.

Do you think that others in the field are complicating the “relationship” issue as well? Are we missing the point?

I think that, particularly with tight money, funders are looking for projects that can potentially have an impact. What’s important is for filmmakers to be able to clearly articulate what their hoped-for outcomes are – they can’t guarantee. And then, to be able to say what activities they are going to put into place to reach those hoped-for outcomes. It’s all about clarity and communication. But that’s what it’s always been about. In other words, it’s not about a funder-practitioner relationship; it’s about people being clear and not over-projecting.

So no matter how much the technology and the funding landscape change, those are the essential things that people need to be able to do well?

Exactly. And if a filmmaker can’t articulate the focus of the story they’re seeking funding to tell, then it’s not a good bet. Granted, it’s a documentary and you don’t know what’s going to happen once you get into the field, but there’s a reason you chose the subject in the first place. Let funders know the story you’re hoping to tell, how you’d like to tell it, and what impact you hope the story will have on the audience once it’s seen. And, what actions you hope the audience might take as a result of seeing the film and what you’re going to put into place to help them take that action.

“Be clear.” It sounds like good common sense, but our research and interviews tell us it can be a surprisingly difficult thing to do. How does a filmmaker make their vision understood?

Well, the death of common sense is a critical problem, but it’s not just related to doing media funding! An emphasis that I think is so important for filmmakers to understand is that, if they want to attract funders, they have to have a really smart audience engagement piece attached to their work. It’s important to start developing that work early on in a project. Unfortunately most filmmakers leave outreach/engagement planning until the end. But I maintain that if they started out sooner, and articulated their plans in their production proposals, they would be able to close their funding gap on production quicker. And these days they have more tools and templates to design an engagement campaign, even without funding.

Many people have discussed the power dynamic between funders and filmmakers, saying it’s why some projects hit a snag. Would you agree with that?

I still think that’s a communication issue. It’s easy to say, “Well, this didn’t get done well because of the power dynamic.” But, I’ve seen tenacious filmmakers who are hell-bent and determined to tell a particular story. They get that story done, and they’re able to explain the story that they want to tell to everyone. I think, quite honestly, the money issue is overrated. It’s really not about money. It’s about creativity and tenacity in equal parts.

So that tenacious, clear vision conquers all?

Yes. I’ve just seen it happen too many times. And if you look at most films – if they’re long-form, in-depth, needing research and travel and whatever else – they’re expensive. They need many funders, large and small. And they get done, and they’re good, and they get awards. What I hate to see is the whole thing being reduced to whether or not you get adequate funding. That’s not what it’s about. Filmmaking is an art, the craft of storytelling. And in the end I really do believe that the artists prevail – and that’s where the tenacity comes in, where somebody really feels compelled to realize a vision. No amount of Prenups is going to make a film real or good.