Here at Active Voice Lab, we’re celebrating Pride Month by honoring the storytellers who have changed the cultural narrative to advance LGBTQ equality. I think about the late, great Marlon Riggs’ Tongues Untied (which we had the privilege to air on POV in 1991), a shocking lesbian kiss on a Roseanne episode (1994), and stereotype crushing Brokeback Mountain (2005).

Which brings me to Deborah Esquenazi, whose electrifying feature-length documentary Southwest of Salem follows story of four lesbian Latinas (“The San Antonio 4”) who were falsely accused and convicted of child abuse. 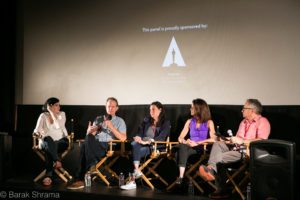 I met Deborah at Frameline40: San Francisco International LGBTQ Film Festival, where we were both on a panel called “LGBTQ Films as an Agent of Social Change”: Then and Now.” (Ok, yes, I was part of the “Then”…I’ll take it.)  The film had just premiered and the response was overwhelming. But it wasn’t just the intimate and unblinking filmmaking that I admired — it was the strategy and generosity she brought to the project from day one. Here’s what I learned that might be helpful to you, too:

In November of 2016, the Texas Court of Criminal Appeals exonerated the four women that Deborah had been fighting for, citing Southwest of Salem directly.

You can read more about Shovels – films like Southwest of Salem, that dig for the truth – here.