Why Some Stories Are Worth Waiting For

Despite the rush to make films shorter, punchier, and more quickly, lots of stories with a strong point of view and complexity can only do their subject justice if they are allowed to evolve over time.

That’s why we’re particularly excited about the release of Backpack Full of Cash, directed by Sarah Mondale and co-produced by Vera Aronow.  And we’re not the only ones: It took second place in FilmFest DC’s Audience Award Competition for Best Documentary last Saturday night—after selling out twice in DC and also in Nashville. (Will Seattle International Film Festival be next?)

When Active Voice Lab first started working with this highly opinionated, shot-over-a-school-year documentary about the consequences of unaccountable charter schools, vouchers, and online K-12 education schemes in 2012, very few of our partners had the issue on their radar. We convened a prescient handful of public school advocates at the Ford Foundation, searched high and low for public opinion research, and even proposed a kind of silly backpack “stunt” for back to school—just to get the story on the proverbial map. 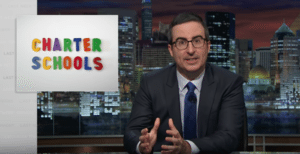 Fast forward to April 2017, when the film was finally completed. The new presidential administration’s appetite for privatization now has parents, teachers, and community groups around the country debating the consequences of market-driven education. The new Education Secretary, Betsy DeVos, has faced protest because of her passion for school vouchers. From the NAACP to the Movement for Black Lives to John Oliver, questions about education equity have abounded. The stakes are higher than ever. 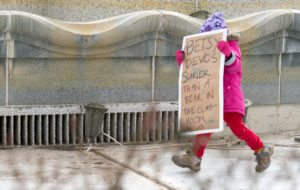 Now, everywhere that Backpack screens, requests for additional screenings of this complex, feature-length documentary are mounting exponentially. People want to be involved in the future of education, to understand policies that affect their lives, to connect with others, to be heard.

I’m not saying that holding a film until the time seems “right” is a good idea (Backpack’s delay was actually due to a funding gap, which we’ll talk about in upcoming posts.) And I’m strongly advocating that this film be adapted into much shorter and navigable chunks for targeted purposes. But sometimes the evolution of a story pairs perfectly with, or even fuels the momentum of, a movement.

Real change takes time. And some films do, too.