Few know that the sole genocide in the Americas in the 20th century occurred in Guatemala against the Maya people. Even in Guatemala there is scant knowledge of the genocide, the memory of which has been suppressed and officially denied for 30 years.

Granito documents the lawyers and activists who seek to hold the perpetrators of the genocide accountable. The film explores the ways that dedicated individuals contributed their tiny grain of sand—their “granito”—to this effort, through forensic science, archival research, community organizing, witness testimonies, and the documentary footage itself, which became key evidence in the trial.

To raise awareness of the 1982 genocide against the Maya people in Guatamala, to contribute granitoto the campaign to have former dictator Efraín Ríos Montt tried for the crime of genocide, and to be a galvanizing force for the restoration of collective memory of the genocide. 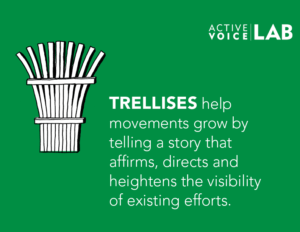 Granito is a dramatic example of a Trellis because it literally built a structure for the untold story of how—over the course of thirty years—seven protagonists in Guatemala, Spain, and the United States attempted to bring a dictator to justice and give the Maya Ixil people their day in court. Starting from the ground up, Granitois an as-it-happens account of the way a new generation of human rights activists operates in a globalized, media-saturated world. It shows how multiple efforts—the work of the lawyers, the testimony of survivors, a documentary film, the willingness of a Spanish judge to assert international jurisdiction—gained strength and stature to tip the scales of justice. In doing so, Granito serves to inspire viewers as they consider how to engage with this particular struggle, as well as with other human rights issues.

The campaign used screenings, partnerships, workshops, a concurrent transmedia project, and a unique social justice distribution strategy, creating a “lattice” of opportunities for all kinds of viewers to contribute their own Granito and support the justice process in Guatamala.

Screenings took place in countries all over the world, including screenings for critical partners such as The Center for Human Rights Legal Action (CALDH), The Center for Justice and Accountability (CJA), Open Society Justice Initiative (OSJI), The National Security Archive (NSA), and The International Center for Transitional Justice (ICTJ). In turn, these partners used the film to bolster their work to bring Montt to trial. Workshops rooted in the film were held for various groups—including indigenous youth—creating safe spaces for open discussion.

Using a distribution model in which the filmmaker controls distribution rather than a distributor, the Granito team made the film available for streaming on P.O.V., Vimeo on Demand, and New Day Digital, as well as for purchase on DVD. The team also made the film freely available online to all Guatemalan human rights NGOs and educational institutions and gave masters of the films to “El Buki,” Guatemala’s biggest bootlegger of DVDs.

Additionally, the Granito team launched a transmedia project called “Granito: Every Memory Matters” (GMEM) to help recover the Guatemalan collective memory. GMEM provides a platform and tools for the recovery of memories related to the armed conflict in Guatemala. The memories shared through GMEM can be in the form of short videos, photographs, letters, music, and even text messages about a loved one lost. All the media generated through this project flows into the online interactive website that serves as a public archive; each memory is rendered highly searchable through embedded tags and visualized in an interactive map and timeline.

Granito was key to building the political will necessary to bring Montt to trail. A few examples: The Center for Human Rights Legal Action (CALDH) used excerpts from Granito to convince the Guatemalan Attorney General that there was sufficient evidence to bring Ríos Montt to trial. The Center for Justice and Accountability (CJA) used excerpts from Granito to build their case before the Spanish National Court, which also issued an indictment and arrest warrant for Ríos Montt. Open Society Justice Initiative (OSJI) used Granito to convince judges and jurists from across Latin America to become observers in the Rios Montt trial in Guatemala. U.S. Ambassador-at-Large for War Crimes Stephen Rapp uses Granito with his staff in the U.S. State Department to brief them about the Ríos Montt trial, stating, “I delivered a forceful and consistent message to Guatemala for the trial to go forward.”

On May 10, 2013 General Ríos Montt was convicted of genocide in a Guatemalan court and sentenced to eighty years in prison. Granito was the first time that a film has been used as key evidence to indict and convict under Guatemalan law. This conviction has rewritten the historical narrative of Guatemala so that even though the guilty verdict was vacated ten days later by the Constitutional Court of Guatemala, this move fully exposed the apparatus of impunity used to protect the powerful, and the victims consider it an illegal ruling.

Ultimately, audiences were transformed from passive onlookers to active participants for social change and for justice in Guatamala as they began to see themselves as granitos contributing to a larger movement. This was evidenced after our screenings when the filmmakers and outreach coordinators were often approached with the question: “I am determined to contribute my granito. How can I?”