Hybrid: Forged as Rake, Stronger as a Trellis 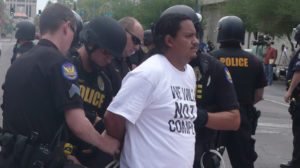 The State of Arizona focuses on the controversial “show me your papers” law, SB1070. The feature-length, verité documentary interweaves the volatile themes of immigration and race portrayed through a mosaic of characters and their responses to the law. Through the personal stories of individuals impacting and impacted by immigration policies, the film explores the social and political circumstances that gave rise to SB1070, examining the roles played by government and business, as well as the human consequences of the policy.

With its January 2014 Independent Lens broadcast as the centerpiece, The State of Arizona has been the focus of a vigorous national community engagement campaign. A Community Cinema selection, the film has been used by over 100 communities across the country to spark conversations and prompt action around immigration reform. For example, a post screening panel that included the New York City Commissioner on Immigrant Affairs and the Executive Director of LatinoJustice/PRLDEF emphasized rallying lawyers to provide pro bono services on immigration-related matters, including representing unaccompanied minors in deportation proceedings. Other screenings have engendered dialogue about comprehensive immigration reform, voter registration and concerns surrounding changing communities. American Constitution Society used an outtake from the film to mark Constitution Week and Hispanic Heritage Month.

AV Lab: Carlos, I think of you as a Rake-maker, after the magnificent way you captured so many perspectives on immigration in the documentary Farmingville (2003). But I kept hearing about your and Catherine Tambini’s new film, The State of Arizona, from immigration reform advocates and Latino organizations. Were you surprised to have a Trellis on your hands?

Carlos: You know, the film started out as a Rake, and personally,

I think of it that way. Catherine and I had every intention of telling the story of SB1070 through a range of characters in Arizona at a very tense time, just as we did in Farmingville,Long Island a decade earlier. But his time, the access we had to the immigrant advocates came more easily than the confidence we could gain with their foes. While we were able to find a few people who were on the fence, generally the situation was very polarized. Also we came into the story as the immigrant community had had enough. Organizations across Arizona – and the nation — were pushing back against tough immigration laws like SB1070. There was so much energy that this pushback is what ended up propelling the movie emotionally. Arizona proved to be a turning point in the immigration debate, the place where immigration fever broke, at least for a time. Depicting this successful turn by pro-immigrant forces has left audiences – especially Latino audiences – feeling empowered. And so, to our surprise, we found we had built more of a Trellis than a Rake.

AV Lab: Has the way advocates used your films changed over the past decade?

Carlos: Yes and no. The essence of what film provides is story. As an old policy hand, I know that stories penetrate emotional channels and receptors that are hard to reach otherwise. That remains the essential power of film. That hasn’t changed. However advocates have become more conscience of the ability of film to move the dial, which is fantastic. Look at the direct impact of films like The Invisible War and An Inconvenient Truth. They’ve created an awareness of the impact of film and raised the bar on what advocates expect from a film in promoting a cause. With this has come not only higher expectation, but also increasing sophistication among advocates about how to use film. For example, with The State of Arizona, we’ve learned that portions of the film can be teased out to promote specific goals, like Latino voter registration. I strongly believe that the truest way we can have impact is by staying true to our unique role as tellers of stories that can challenge, inspire anger and even laugh. So the essence of film as a vehicle for social change hasn’t changed. It’s still about the power of a good story, well told