Directed and produced by Kim Snyder

Set against the backdrop of a shaky economy, Welcome to Shelbyville takes an intimate look at a Southern town experiencing a new wave of Somali refugees that causes its residents—both immigrants and native born—to grapple with their beliefs, their histories, and their evolving ways of life.

To build bridges between long-term Americans and recently arrived immigrants.

Why It’s a Rake

Welcome to Shelbyville is not about the politics or policies around immigration, but rather highlights the lives of neighbors affected by demographic change so that viewers can see the human faces and complex stories behind the issue. 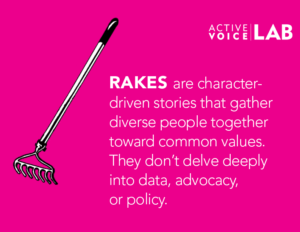 AV Lab conceived the project precisely because the story of a community coming to terms with—and even welcoming—its changing population hadn’t been widely told. Partners like Welcoming America, a network that promotes mutual respect between foreign-born and U.S.-born Americans, needed a story that would inspire people with varied personal experiences on immigration to speak from their hearts, opening up honest dialogues in small towns and large cities around the country. Like a Rake, they sought a narrative that would bring people together across different experience.

We asked filmmaker Kim Snyder to visit Shelbyville, Tennessee (population 16,000), and she found some amazing examples of intertwined lives: an African American mayor who must look past his own biases to understand the new residents; an immigrant family from Mexico who has risen to the middle class after many years in the town and is determined to help pave an easier path for the newcomers; a recently arrived Somali-nurse-turned-meat-packer who is struggling to get to know her neighbors; a skeptical white journalist, responsible for capturing the “truth” about the changes underway, and more.

There are no interviews of experts in Welcome to Shelbyville. All the action takes place in the small town over several months. Some of the town’s residents talk about their attitudes toward immigration policy, but their larger focus is on their hopes for the future, their fears around possible changes, and, in a few wonderful scenes, their newfound friendships. Over dinner tables and car tune-ups, we walk in their shoes and hear them ask questions that perhaps cause some viewers to squirm. Snyder was careful to let everyone—those who welcomed immigrants, those who feared immigrants, and those who had come to Shelbyville to start a better life—speak for themselves. As a garden rake pulls various leaves and sticks together, the documentary revealed how, by connecting around common human values, some of the town’s new and life-long residents found common ground.

Active Voice sought to bring Welcome to Shelbyville to diverse groups of people in towns and cities where immigration was becoming a hot button issue. Over the course of several years, they established an ecosystem of national partners—funders, grassroots organizers, policy watchers, faith leaders, and others—to conceptualize the project. The documentary and the campaign were aimed at those who were “beyond the choir,” that is, those who lacked information or had misgivings about immigrants in the United States today. To engage this often hard-to-reach audience, the campaign included VIP events, community screenings and dialogues, conference events, a website, short videos, a social media campaign, and more. Special attention was paid to public libraries, rural communities, organizations like the YMCA, and faith-based networks—places where people could, Rake-like, come together and speak candidly and outside the shrill, polarized debate that pundits have seemingly cornered on issues around immigration. 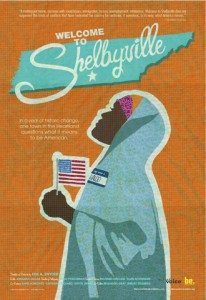 as well as we do today, we would have laid a better groundwork for tracking outcomes during the three years we worked with Welcome to Shelbyville and on the campaign. That said, in 2011, with support from the MacArthur Foundation, we asked the evaluation firm Community Science (CS) to look at two participating communities. Using mixed-method evaluation—including sequential interviews with public officials and community leaders—CS reported that the campaign contributed, directly or indirectly, to several outcomes including strengthened nascent organizations and new safe spaces for long overdue civic dialogue. Our own interviews revealed that the campaign helped build bridges between people with varying perspectives on immigration, from Staten Island, New York, to Greeley, Colorado, and from New Orleans, Louisiana, to Boise, Ohio. Anecdotally, at a community forum in Birmingham, Alabama, a city council member from a surrounding community confided that his perspective was changed after attending a Welcoming Alabama event, and that he wished he had seen the film before he endorsed anti-immigrant legislation.

While the key strength of Welcome to Shelbyville lies in its Rake-like capacity to pull people together around common values, we created companion components based on the needs of the field:

—TROWEL Hawo’s Dinner Party: This half-hour profile of Hawo, the Somali-nurse-turned-Shelbyville-meatpacker, was used by human rights advocates to combat negative stereotypes about people from Muslim-majority countries during the tenth anniversary of 9/11.