Blackfish tells the story of Tilikum, a performing killer whale that killed several people while in captivity. Director-producer Gabriela Cowperthwaite compiles shocking footage and emotional interviews to explore the creature’s extraordinary nature, the cruel treatment of killer whales in captivity, the lives and losses of their trainers, and the pressures brought to bear by the multi-billion dollar sea-park industry.

Expose SeaWorld as a business run on poor ethics and inspire a movement to end killer whale captivity.

Blackfish’s central aim from the start has been to uncover facts and tell the story of a major injustice—the primary purpose of a Shovel. The original concept of the film was sparked by confusion around the death of SeaWorld employee Dawn Brancheau in 2010, and at first the film simply aimed to uncover the truth around this tragedy. But in doing so, the film exposed horrifying abuses against marine mammals at SeaWorld, shocking the nation and leading to direct 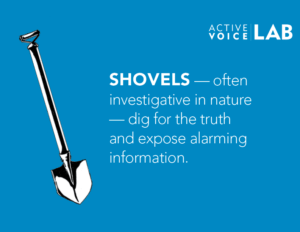 repercussions that have affected SeaWorld and challenged its ability to continue operations. The film’s fact-finding ultimately exposed SeaWorld as a multi-million dollar industry that, based on evidence shown in the film, profits from the mistreatment of animals. “The experiment has to stop” are words used by the documentary filmmaker Gabriela Cowperthwaite who, since finishing the film, has called for the shutdown of theme parks such as SeaWorld. What makes this film a Shovel is the process of investigation and transformation taken by the filmmaker through the course of the film. What began as an interest developed into a much larger story that uncovered systemic injustice.

The documentary’s objective was to expose SeaWorld’s abuse of killer whales. In order to achieve this, the filmmaker took a strong point of view, claiming that keeping killer whales in captivity, no matter how careful theme parks and aquariums are, is fundamentally wrong. While the filmmaker did aim to tell the story from SeaWorld’s perspective as well and made several attempts to contact SeaWorld, they always declined the interview requests. Therefore, the film seeks to galvanize the general public to increase advocacy to prohibit killer whales in captivity.

The filmmakers recognized that the general public had been largely neutral on this issue,  so they focused outreach efforts to capitalize on the sensationalist nature of the film. In trailers and marketing materials, they used descriptors like “thriller” and “detective story.” This kind of framing appealed to audiences interested in an exciting story—a broad-reaching audience in the United States. The film did not embark on any major strategic campaign to build bridges with any SeaWorld sympathizers.

The film focused on and referred audiences interested in taking action to the organization Voice of the Orcas, set up by some of the ex-trainers featured in the film. The film’s website also lists around twenty other activist organizations where you can take action to support the issues raised in the film.

The outcomes resulting from this film have been staggering. The film itself is one of the most widely viewed and highly grossing documentaries in the United States. SeaWorld took note, designing an elaborate anti-smear campaign with an advertising website that emerges as the first hit on a Google search for “Blackfish.” In early 2014, SeaWorld sent a detailed critique of the film to approximately fifty film critics right before they were going to review the film. SeaWorld is currently mired in several legal efforts to defend lawsuits being brought upon them as a direct result of the film.

In March 2014, New York Senate Bill 6613 prohibiting the possession and harboring of killer whales was passed by the Standing Committee on Environmental Conservation and now waits to be voted into law. In April 2014, California Senate Bill 2140 was proposed. The lawmaker who proposed this bill, Democrat Richard Bloom, has directly attributed his work on the bill to seeing the film Blackfish. In August 2014, when  SeaWorld stocks had reached an all time low of 20 percent, SeaWorld finally made a public statement linking the documentary itself to their drop in sales. They have since unveiled a new plan to double the size of the tanks that hold their whales.

Finally, in addition to the negative backlash, organizations affiliated with Blackfish have received increased donations and support, and in March 2014 Director Gabriela Cowperthwaite was presented with the Impact Award at the Humane Society of the United States.