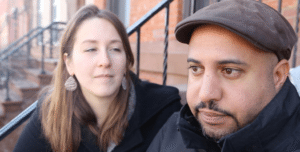 Sandy Storyline is a participatory, web-based documentary that explores the immediate and still unfolding impacts of Hurricane Sandy through the experiences of some of the millions of people whose lives were affected by the storm. The project integrates a series of professionally produced, character-driven short films with a growing collection of multimedia stories contributed by residents, business owners, volunteers, and citizen and professional journalists. Sandy Storyline reveals Hurricane Sandy’s ongoing impact as other media coverage fades, with personal stories that explicate public policy challenges, including crumbling social safety nets, the precarious position of an over-leveraged middle class, and disinvestment in public infrastructure.

Why It’s a Sprinkler

Sandy Storyline is a Sprinkler because the filmmakers worked to include and engage their subjects in the storytelling process. In contrast to traditional observational documentary storytelling, Rachel Falcone and Michael Premo worked collaboratively with their subjects to tell the story of the aftermath of Hurricane Sandy. The project’s website, sandystoryline.com, hosts a growing collection of multimedia content (text, video, audio, photo), much of which is contributed by those affected by the hurricane. The filmmakers share some of their rationale behind choosing this format for the website: “Participatory documentaries are about designing a storytelling process that honors and reflects the voices and leadership of people impacted by an event or ongoing situation. We understand that affected communities are uniquely positioned to offer expert documentation, research, and analysis to help understand and shape how we respond.”

Sandy Storyline’s participatory documentary web platform was designed to engage audiences in conjunction with the development—rather than after the release—of the project. The website also hosts a range of multimedia content featuring the stories of those affected by Hurricane Sandy. This content is collected through four main channels: 1) submit video, audio, photos, or writing related to Hurricane Sandy directly to the project website; 2) record an audio story via SMS or MMS; 3) share a story in person with the project’s network of journalists and mediamakers; or (4) attend an exhibition or live event designed to share and collect stories (the Sandy Storyline team partners with schools, colleges, and adult and youth groups to organize media production and literacy workshops that equip participants with storytelling skills and tools).

Sandy Storyline is an example of participatory storytelling, and the filmmakers were invited to present their participatory documentary platform at 38 venues. See the full list of venues here: (http://www.storyline.media/speaking-engagements-and-events). Additionally, it received Tribeca Film Festival’s 2013 Bombay Sapphire® Award for Transmedia.