In the wake of the U.S. economic crisis, the widening gap between the rich and the poor has gained unprecedented public awareness. The 400 richest Americans now own more wealth than the bottom 150 million combined. In Inequality for All, former Secretary of Labor Robert Reich persuasively explains why this disparity is a threat to democracy.

To increase awareness about widening income inequality in the U.S. and to encourage viewers to take action toward closing this gap and strengthening the middle class.

Why It’s a Trowel

Like a Trowel that is aimed for a specific depth, the film has a keen, sharp focus. It doesn’t complicate our journey by validating other opinions or theories about the economy. Through newly shot and archival footage, as well as innovative graphics, audiences learn how inequality came about and where our economy is headed if action isn’t taken. 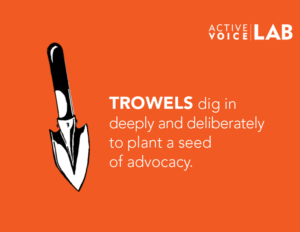 That said, there is no vilifying of the rich in this Trowel. Instead, the film interweaves economic theory and Reich’s explanations with real-world stories of people from across the economic spectrum. These stories help Reich—and the audience—connect the dots between, as they put it, “the strength of the middle class and the strength of America.” Audiences see the growing unrest as Tea Party protests, Occupy images, and angry, confused Americans chant their way across the screen. Nevertheless, Reich remains stalwart about his analysis and, ultimately, optimistic about people’s ability to affect system change.

Although it tackled a huge, seemingly insurmountable social problem—widening income inequality—this Trowel campaign encouraged concerned viewers to choose from among six different advocacy options. From “Raising Worker’s Voices” (organize your own workplace with help from co-worker.org) to “Reforming Wall Street” (support the 21st Century Glass Steagal Act), the film’s website encourages visitors to select an incremental step that matters most to them. Like a Trowel, all actions led to the same direction—closing the income gap and strengthening the middle class.

In Fall 2013, Inequality for All opened in more than 100 theaters nationwide and developed an engaged base of students, educators, union members, faith leaders, policy makers, and concerned citizens. PictureMotion continued to work with these partners. For example, 270 colleges/universities across the country held College Night screening events, enabling thousands of students and hundreds of teachers to watch the film and tune into a live webcast with Robert Reich. They used different platforms, from Google Hangout to conference lines, to connect participants with the film team and high-profile figures.

To capitalize on the support they had from high-profile policy makers, they arranged 700 house party screenings with Democracy for America and a live conference call with Robert Reich and Senator Elizabeth Warren, which included more than 7,000 participants. Using May Day as a hook to address workers’ rights and economic justice, they organized a special night of screenings and conversations with faith communities and labor unions. Forty-two successful screenings with more than 118 State Representatives, legislators, and policymakers in attendance inspired discussions around inequality in general, raising the minimum wage, tax reform, and other economic justice issues. As this Trowel dug deeper, it planted seeds of advocacy by constantly referring targeted audiences to action steps, policy initiatives, and allied organizations.

The Inequality for All campaign did not have a formal assessment, but the organizers have significant evidence of people connecting around—and acting on—Robert Reich’s ideas. For example, 42 screenings in state capitols brought together a wide array of committees, organizations and legislators from xx states. Following the College Night event, Secretary Reich released a petition to raise the minimum wage to $15, which was sent to participating College Night schools and has since been signed by 25,256 supporters. And individuals are indeed identifying areas of advocacy that address their own concerns: a US Airways flight attendant saw Inequality For All and was inspired to organize her colleagues to ask the airline to reconsider a decision that is disrupting employees’ long-distance commutes to work. She recruited 3,000 US Airways employees to join her campaign and delivered her petition to US Airways management.