In the Academy Award-nominated film The Visitor, 62-year-old Walter Vale is a Connecticut economics professor who is sleepwalking through life. When he returns to his long-unused Manhattan apartment to attend a conference, Walter is surprised to find a young couple has taken up residence there—victims of a real estate scam. So begins the story of a budding friendship between this disillusioned professor, a talented Syrian musician, Tarek, his Senegalese girlfriend, Zainab, and eventually Tarek’s mother, Mouna. This unexpected turn awakens new passions, understandings, and connections.

A community-based effort to build awareness and then move audiences to take action around unjust policies that target, detain, and deport immigrants—often without due process.

Why It’s a Wheelbarrow 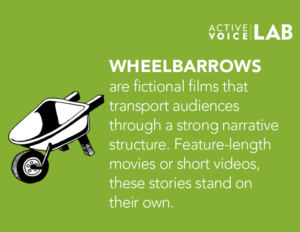 The Visitor is first and foremost a story about relationships and the unpredictable ways the characters’ experiences transform them. There are no attempts to place Walter’s story in a wider context, and—except for an extraordinary scene in which, with a highly personal sense of grief, he confronts a desk clerk in a detention facility—few references to the U.S.’s policy on immigrant detention. Instead, all the action takes place through a beautifully crafted storyline, led by nuanced characters whose quiet and unexpected friendships captivate viewers and draw them in—until circumstances change irrevocably. The Visitor is not about immigration policy, and this was intentional. As writer/director McCarthy, who visited detainees while writing his original script, asked rhetorically, “Who wants to see a detention film?”

Due to its subtle and immersive storyline, The Visitor was able to attract many people who might never have opted to see a film about immigration policy. When you’re trying to reach audiences that generally self-select out of issue-based films, these creative choices can be key. Many advocates, including Andrea Black of Detention Watch Network, underscored this point. Audiences see, for example, “The character of Walter going through this transformation from sad to scared to angry,” she explains. But this only makes sense in light of the injustice that his new and high-spirited friend, Tarek, suffers. Viewers are thus left to wonder: If a guy like Tarek—handsome, affable, and hanging out with a college professor friend—can get detained and deported, then what are the chances for someone else?

On behalf of the film’s producer, Participant Media, prior to opening night of the theatrical release Active Voice organized “opinion leader” sneak previews in twenty cities. It was important to get the word out about the upcoming theatrical run but to do so in ways that would not over-politicize the story and thereby deter film goers who were simply in search of excellent entertainment. To make sure that people who were curious or concerned about Tarek’s detention and swift deportation, AV created a “What You Can Do” brochures with facts, figures, and contact information for human rights organizations who are advocating for policy reform.

After the theatrical distribution, with support from Open Society Foundations, Active Voice identified more than thirty other communities with nearby detention facilities and sizeable Arab, Middle Eastern, Muslim, and South Asian populations. Active Voice helped local partners in each site to transform a night at the movies into “high impact” events. From Detroit to Nashville to Colorado Springs, The Visitor was used to educate audiences about local policy issues, enlist them to visit nearby detention centers, get their help on advocacy efforts, and more. At these and many other screenings, the film gave audiences a potent story, while structured discussions and a detailed Action Guide (which is still being used in law schools) gave them many options for converting their empathy into informed action. This is key for Wheelbarrows: By anticipating the range of emotional responses to the characters and their own transformations, and the questions some viewers are likely to ask when the credits roll, Wheelbarrow campaigns can create a path for newly energized movie lovers to take productive next steps.

The Visitor was ranked in the top ten at the box office three weeks in a row and played an important role in reaching beyond the choir. Anecdotally, most of our partners mentioned that at least half of their audiences seemed to know little to nothing about the issues when they first arrived and that afterward many were motivated to learn more or get involved in other ways. Ultimately the campaign succeeded in its objective to build new alliances around detention issues, support community-based organizations’ existing efforts, and engage college students and faculty to advocate for modernized immigration laws. Nationally, the film and campaign also succeeded at raising the visibility of existing national policy efforts. Affiliates of the Rights Working Group, for example, tied the film to their “Hold DHS Accountable” campaign to place a moratorium on policies that effectively deny due process for immigrant detainees. And a Washington D.C. screening by the National Consortium of Torture Treatment Programs, attended by government representatives and NGO’s, inspired Congresswoman Zoe Lofgren to double down on her commitment to detainee issues and to help The Visitor campaign partner, Survivors of Torture International, however she could.

In San Diego, our partner used their screening to raise awareness about the construction of a new 3,000-bed correctional facility in the area, and organizers were able to sign up more than 240 new supporters to help counteract inhumane conditions at an existing detention facility nearby. A screening in Colorado Springs prompted more than two-thirds of the audience to sign up for a tour of a local detention facility. Partners in Nashville and Nebraska used the film to educate the public about newly formed “welcoming initiatives” in their states. And in Denver, audience members wrote holiday cards to people in detention.

Change begins with awareness, but awareness itself is rarely sufficient. What about the hundreds of thousands of immigrants who are detained annually in prison-like conditions around the U.S., without a day in court? During the campaign, Participant Media’s partner O’Melveny & Myers, an international multi-practice law firm, flagged the need for training attorneys to represent detainees at bond hearings. With communications and screening assistance from Active Voice, the firm used the film to inspire pro bono lawyers and then trained scores of them in jurisdictions around the country to do just that.