In 2007, with initial support from the Ford Foundation, Active Voice paired producers with seasoned teams of issue experts — from scholars to policy analysts to advocates — who had an equally keen desire for stories that resonated with diverse, sometimes divided audiences. This grew into a multi-year project called Beyond the Choir to establish a community of producers and strategists who wanted to create and use films that tell powerful stories, engage people across divides, and help them understand the high stakes of policy reform. AV Lab’s groundbreaking work with this project has heavily informed the way our field thinks about engagement work. Beyond the Choir became the guiding philosophy of Active Voice campaigns.

Read the full 2010 case study of our Beyond the Choir initiative. 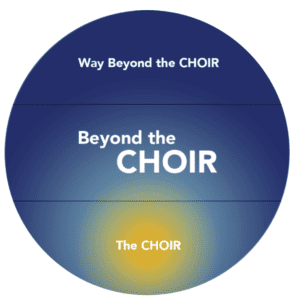 Farmingville is a classic “beyond the choir” film because people with very divergent opinions can relate to the narrative, while experiencing new perspectives in a non-threatening way. Directed by Carlos Sandoval and Catherine Tambini, the film is set in suburban New York in the wake of a violent incident against day laborers from Mexico. One of the characters, Louise, a native-born suburbanite, talks about how she’d like to find out more about the men on the street corners — without being called a racist.

Farmingville lets Louise and many other people in the community have their say. Although the film is sympathetic to the immigrant characters, disparate audiences embraced it because they saw their questions and concerns reflected in the narrative.

Active Voice Lab looks for “Louises” in other films — interesting, conflicted characters that audiences connect with, who speak candidly about their personal concerns and aren’t demonized for their beliefs. See why we think that Farmingville and other BTC films are great Rakes.

Read our research on our work with Farmingville and the Brooking Institution.

"The Farmingville Campaign created ‘safety zones’ where people could speak honestly about what is and isn’t working as we try to integrate immigrants into civic life today." -- Daranee Petsod, Executive Director, Grantmakers Concerned with Immigrants and Refugees The brutal, hate-based be...

Read more about our work with FARMINGVILLE.